Medieval HD for iPad is an addictive defend-your-castle game with beautiful graphics and a seemingly infinite amount of gameplay.

Created by Brisk Mobile, the simple goal of Medieval is to destroy your opponent’s castle across the way before his troops in red take your flag or turn your castle into smithereens.

The difficulty of this mission depends not only on how far you’ve advanced into the game, but also on whether you choose Easy, Medium or Hard in the initial options menu. Whatever your level of play, somehow rushing troops on horseback and hot air balloons that shoot fire arrows feel pretty intimidating when they’re rushing in the direction of your castle.

As it turns out, that’s not the least of it. Medieval HD supports supports a total of eight different troop types in total, including men who shoot arrows (not so intimidating) and the extremely formidable catapult canon. 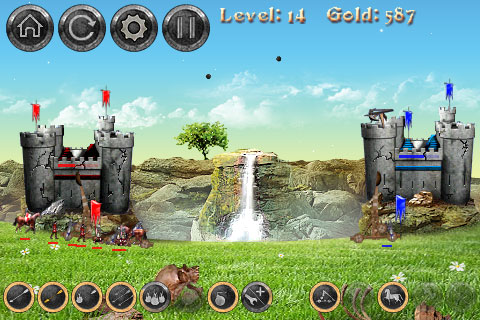 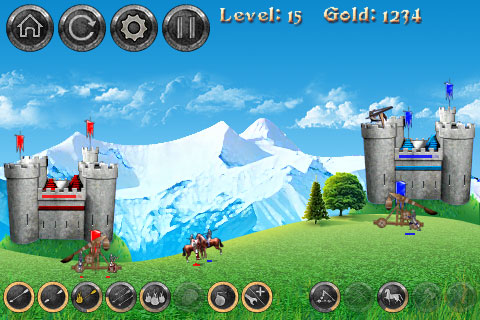 Until you earn enough money to buy ground troops of your own, it’s you and your rooftop weapon launcher against everybody else. When you first start the game, you’re given an unlimited supply of regular arrows that you can shoot in Auto Fire, Show Arc, or Drag Fire.

My favorite method is Drag Fire, which means you bring your launcher back by dragging your finger across the weapon and then let it fly the second you take your finger off the screen. The actual controls are extremely responsive, but getting to be a good aim takes a surprising amount of practice and focus. Pivot your weapon just a tad too far in one direction and your enemy just keeps charging.

With each successful blow against enemy forces you raise a little bit of money. Shooting the bricks on the opposing castle might earn you between $1 and $7 for example, but certain dead on shots against knights might put $30 or more dollars in the bank. All this money adds up, and when you’ve got enough you can go up to the pause-like button at the top of the screen and choose your poison.

The main store offers multiple arrows, flaming arrows, multiple flaming arrows, bombs, cannonball stones, a healing arrow you can shoot at yourself and a variety of other weapons. Each weapon comes with four levels that allow you to increase damage on impact, quicken how fast it takes to recharge your supply and more.

The store also includes a collection of troops you can buy and deploy on your watch, though your little man on horseback will cost you an extra couple hundred bucks a pop. These troops are good for aiding in small defenses, but don’t count on your little man on horseback to help you beat the level completely. He’ll die after he faces a couple ground opponents (and unfortunately sometimes he’s not easy to avoid when you’re throwing your own catapults).

In other words, if I were to offer one game hint it would be this: Invest in your offenses before defense. This tip isn’t based just on the fragility of your troops, but also on a wonderfully frustrating aspect of medieval weapon design. Even though you just bought that infinite supply of flaming arrows you can’t just shower them on your opponents every second. Instead you must wait for the reload graphic to appear in its entirety on the bottom part of the screen, meaning there’s a little strategy behind the warfare.

After awhile you’ll pick up on who needs to get killed with what weapon and find yourself slowly making your way through the numerous iterations of the 9 HD castle world designs.

If you’re not ready to fork over the $2.99 you can try the lite version of the game you can try Medieval here for free. Just be prepared to get addicted and buy the full version anyway.

I couldn’t sleep the night after I got this game and started playing around 1:00AM. I was still playing Medieval when the sun rose and even though I’m on level 27 I’m still enjoying the great war sound effects and great design. 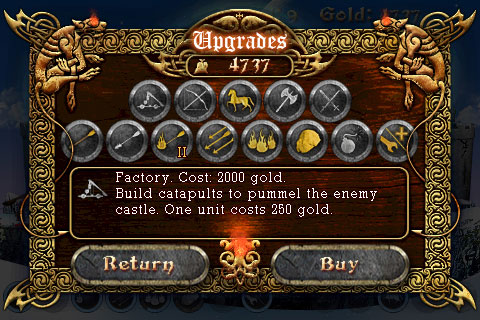 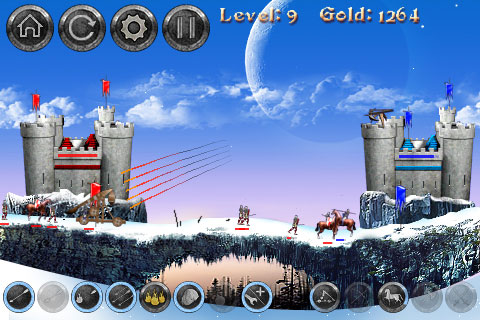