DirecTV, looking to join Xfinity and Dish Network in their efforts, announced that an official iPad application is in development. The handy app will give users full control over their satellite TV service and will allow DirecTV subscribers to browse shows, set up recordings, and control their DVRs using Apple’s intuitive tablet. 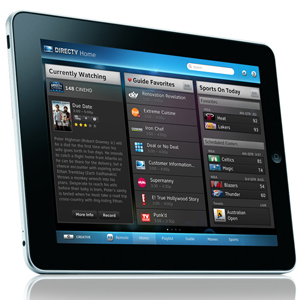 While the  company already offers an iPhone app that lets subscribers view listings and schedule DVR recordings, it’s obvious that DirecTV is  looking to expand their user base with an updated iteration specific to the iPad.

Although DirecTV hasn’t given an official release date for the app, it is listed as “coming soon” on a special section of its Website.

According to that same page on DirecTV’s official website, the app will launch at a home screen that gives you the latest info on shows and movies you’re watching.  Also featured will be upcoming listings for your favorite shows and even a sports roster complete with scores and upcoming schedules.

You’ll also be able to program your DVR from your iPad by scheduling or canceling recordings.  You can also control DVR playback of recorded shows.

Update: DirecTV’s official iPad application has been launched on the App Store. For further information, or to download the application for here, check out the app’s official page in Apple’s market..