The developers behind Angry Birds are at it again with Modern Conflict HD for the iPad, a fast paced, go get ’em wartime strategy game.

Like any war game, the beat-your-enemies ideology behind Modern Conflict is simple. The game features three different types of play (Campaign, Survival, and Special Ops), but the overall gist of the game is the same throughout. All of your focus goes into moving your troops to enemy barracks as efficiently as possible without losing your entire army.

In order to do this, you must plan a ground and air attack strategy that moves your troops where they need to go, when they need to go there. Tap on your own barrack once to mobilize half of your troops and tap twice to send the whole brigade from one base to another. The controls are simple and the movement is really easy to learn, but the hard part is learning how to mobilize troops to go on the attack without leaving your bases exposed to enemy surges.

Whether you’re battling across China, Russia, or America, the game interface is essentially the same, making everything a puzzle and numbers game. If you move too many troops away from a base or don’t give your base enough time to regenerate, it becomes vulnerable. Leave too many bases empty and the battle is lost. Leave too many troops in one place though, and the constantly regenerating enemy troops will overcome you. It’s a heart racing, high pressure game that’s simple and beautifully executed. 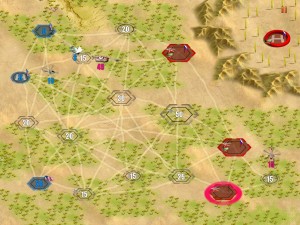 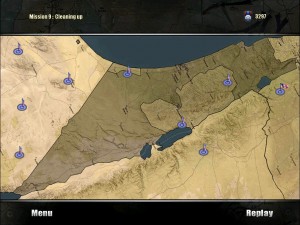 To say that Modern Conflict is beautifully executed isn’t to say that the graphics are amazingly interactive or the equivalent of a console game. There are small variables, but just about everything looks like the screenshots featured throughout, with different ground roads and varying arrangements for barracks and troop configuration. Interactive graphics aren’t the point of this game though, and so while it could be more intense, nothing is lost by the simplicity.

Instead Modern Conflict HD creates a maddeningly quick puzzle-type game that excels on the details. Three levels of difficulty effectively manage different skill levels and the actual battle scenarios about troop movement and the overall status of your war are a nice addition to each battle in campaign mode.

The gameplay is smooth and you can choose to play either with or without sound right from the start, though playing with sound is great in the way that it creates a quiet cacophony of gunfire and voices responding to your tap commands with “Roger” and other affirmations as you send your brigade to war. The overall experience makes for an excellent soundscape and great overall experience.

Bottom Line: Modern Conflict HD is an addictive, fast paced war strategy game that’s more about the strategy than the graphics intensive experience associated with most war games. For less than $2 you’ll get hours and hours of great gameplay. 9/10 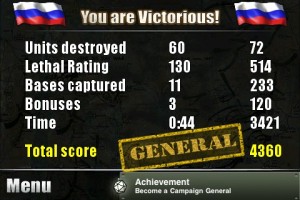 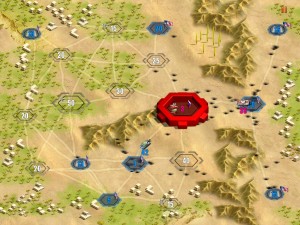