Pool Bar for the iPad is a simple pool simulation game with beautiful details and a lot of potential. Developed by Future Games of London, the app offers one and two player hand off versions of US 8 Ball, UK 8 Ball, and 9 Ball in beautiful detail.

To start a game you pick your game, your difficulty mode, choose one of four characters, and step up to the table. The game automates who breaks by saying one person has won a toss, and the game begins. The game provides visual lines as to how your cue will hit the cue ball as well as a small distance as to the general direction where a hit will send your ball.

There’s a pretty steep learning curve when it comes to figuring out how the controls work, but once you learn the importance of precision not only in angles but also in how hard you hit the ball, the game starts to get a little easier.

The difficulty of mastering the controls wouldn’t be a huge issue except that even in easy mode, the opponents are extremely skilled. They make two or three shots in a row frequently and with long load times between moves, sometimes it feels like you’re watching Pool Bar more than playing it. 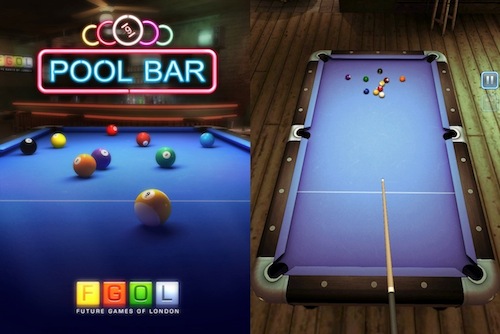 In a way though, watching the game isn’t such a bad thing. The details are stunning. Not only is the actual pool table beautiful, but the bar atmosphere is probably familiar to anybody who has ever been to a bar anywhere. There’s a guy sitting at the bar alone, a dart board, posters on the brick walls, and the kinds of old comfortable couches that have been through who knows what.

When you make a shot, the camera angle shifts so you can see your success front and center on the iPad screen. This is a great experience, and the sounds of the cue balls and a ball landing in any of the pockets is just about as rewarding in the app as it is in real life.

The overall background sounds of bar make you feel like you’re right in the mix of a night out. Cell phones ring sporadically, glasses clatter, and the buzz of voices create a solid rumble. Pieces of a conversation between two men are audible, but real eavesdroppers will quickly pick up on the fact that the sound actually just loops every minute or so. The actual gameplay needs to improve a bit before they start tending to these types of additions, but it would be great to have a jukebox you can control within the app.

That said, once Pool Bar fixes the difficulty and makes the controls a little easier, the app could benefit from a ton of extras. It doesn’t matter whether they choose to have levels that unlock or the ability to play pool shark mode where you bet and then earn money for drinks or something, Pool Bar needs something to really hook people. If Future Games of England figure out how to improve their app though, they will win the hearts of many with Pool Bar.

Bottom Line: Pool Bar is a stunning pool bar app with a ton of potential. Emphasis on the potential.